Kitty and I were discussing today how lots of people feel the love for Burda. And we just can't seem to get on that Burda train. Apparently the fit is great; I don't know because I've never made one - the styles just don't appeal.

Luckily I don't need to do alterations on patterns (apart from sticking in a few cm in the midriff, which makes frocks fit better for long-waisted me), so as long as I check the finished pattern measurement before I choose my size I'm fine (We all do that, don't we? If you don't, you should, or else you risk too much ease, mateys! Nothing kills sass like too much ease!). So the whole fit thing isn't a big issue.

Of the modern patterns I do like New Look.

Hello, they say, I will be a dress for you! Let me be a coat! You'll love me and make me lots! Look at my midriff details and choices of styles! And I'm so cheap - quite frequently as little as $5! Isn't that worth a try?

here are some of my favourites: 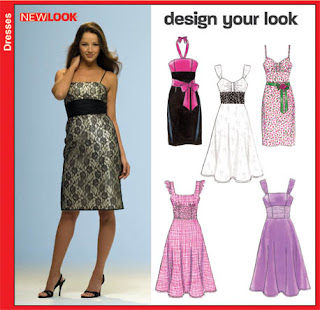 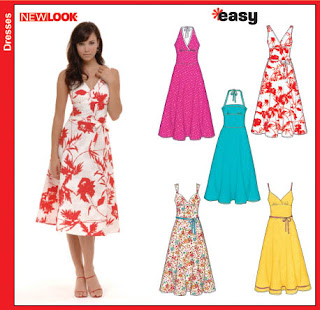 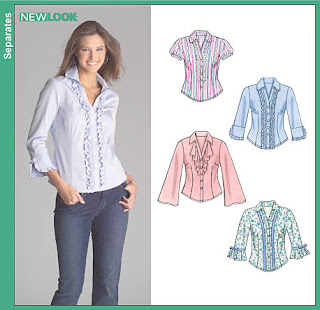 Here's one I'm making at the moment (the coat, in black doubleknit with celadon satin lining) 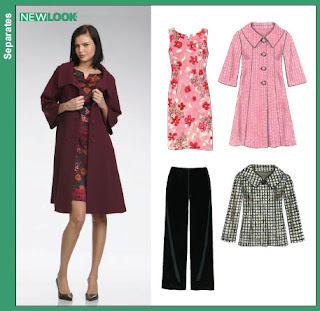 And here is one on my to-make list (it gets rave reviews on PR). 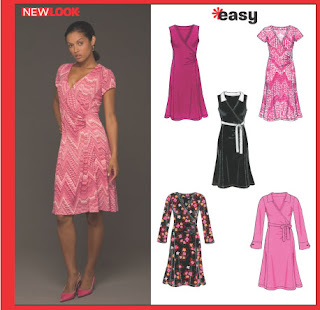 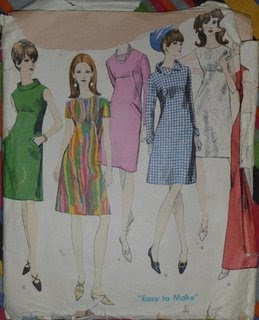 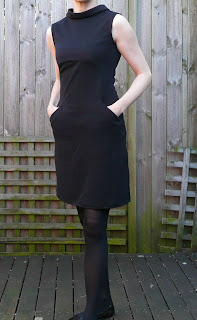 Here's the other frock I made on the weekend. I made the version shown in green on the left of the pattern envelope, in a thick black double knit. The knit doesn't have much stretch, but I still made it without a zip, cutting the back piece on the fold. Thankfully the fabric has enough give so I can get it on fine.

The pockets took the most time, and I messed up the first attempt by cutting the welt too long so it looked like the pocket had some sort of wry grin coming out of the flap. Fortunately I had enough fabric to cut another front piece, and now I know to be much more careful with those snippers!

It's by no means perfect, but I'm the only one who can see that I have sewn the pocket flaps so one is a little wider than the other. And I'm not going to be silly and tell anyone, or put that classified information on the internet for all to see, am I?
Posted by kitty at Friday, June 27, 2008 5 comments

I made two frocks last weekend. Here is one of them: 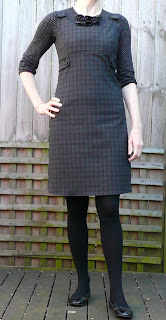 and here is my photographer's assistant checking the lighting: 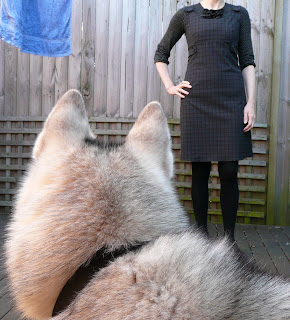 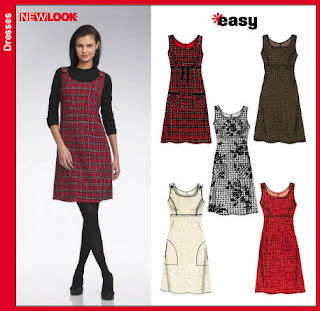 I made the version without front gathers, but with button tabs on the shoulders. I also added the button tabs at the empire waist, but didn't check the pattern before buying the buttons, so I didn't realise that the tabs went around the back of the dress too, requiring 6 buttons. I had four. I'd bought those four buttons in Melbourne, and I was back in Sydney. Hmm. I wanted this dress NOW. So I folded the tabs in half and topstitched to the side seam, only adding buttons at the front. I can't see the buttons on the back when I'm wearing it after all! Sorted!

I don't usually take in-progress photos when I'm sewing, mainly because I'm a 'I want a new frock to wear tonight!' type of girl, not a 'I'll stop and take a helpful photo' type.
I did pause during the making of this dress to take this photo of my beloved new invisible zip foot in action: 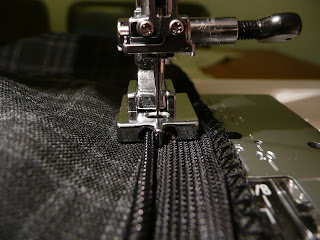 Afterwards, after feeling smugly helpful, I had to do this: 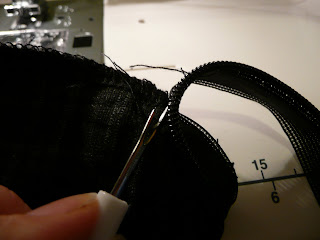 I had twisted the zip tape. I'm never being helpful again.
Today I put the dress on and the zip pull came off. I can't actually pull the zip down, so I shall have to have it surgically removed by Mr M this evening. Pliers may be necessary.

I went to the new location for Remnant Warehouse today, (fab, by the way. So spacious!) and bought some red, some white, and some navy bengaline. The 'Out of the Ashes' patterns arrived two days ago! So quick!
Guess which two frocks I'm making? Warning - Might be obvious: 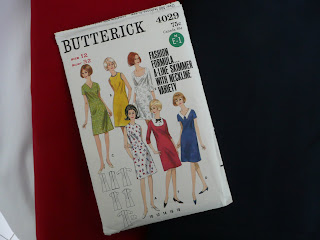 I also bought some cute black and whites, a skull print and a rose print, in (gasp!) polyester! (hangs head in shame): 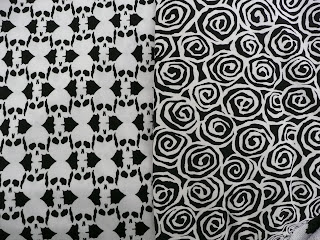 But how cute will they be in the sleeveless-with-tie blouse shown at the bottom of this post?
This post is long enough. I'll post the second frock later.
Posted by kitty at Thursday, June 26, 2008 5 comments

I've been obsessing about a sailor frock for some time now. I see patterns about every so often, but I've had the old "can't find anything else from this seller so not worth the postage" or "I'm not paying x dollars for that!" as I can't imagine having more that one sailor frock.

This was the closest (went for $7.99 I see). I have a number of vintage sewing books with how to draft a sailor collar, and my nicely fitting sloper pattern, so I decided to run one up myself. 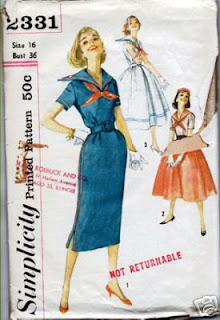 Here she blows!
(Being that it is on Jane, who as previously mentioned is smaller of hip and bigger of waist than I, it doesn't look as sassy as it does in real life. When I wear her I will take a pic.).

I'm pleased. A fifties fair contender along with Rekkid.