Easy stitch 'n save is Easy

At the end of last week, Kitty made a quick visit to Melbourne. Do you think we might've snuck in a bit of fabric shopping? Why, yes we did...

We both bought some poly (I think) knit with a lace print from Spotlight ($5/m knits MUST be bought you know) and also McCall's 6308 - one of their Easy Stitch 'n Save patterns (Clegs was having a half price sale, so we got 'em for $4).

This looks a bit similar to the Out Of Print McCall's 6070, but with a different back and the midriff band doesn't go all the way around.

So, they seemed like a great match. Today is Melbourne Cup Day, so Melbourne gets a public holiday (for a horse race... hey, don't look a gift horse in the mouth!). So I sewed her up today.

I made a few minor changes - added 3cm to the front band to make it more like a midriff band (an added the same to the back of course) and 10cm to the bottom. It was a very quick - under two hours. It would have been even quicker, apart from having to rethread the overlocker from coverstitch to overlocking to rolled hem back to overlocking... phew! I coverstitched the neck instead of using the suggested neck binding.

I also changed the back neckline from a v back to a shallow scoop - it ended up a bit raised, which is a nice effect: 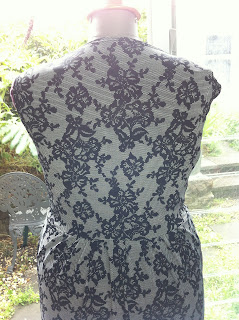 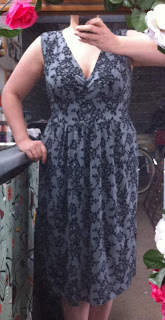 It ended up a little low in the neckline, so I've tacked it closed so it's decent for work...
Posted by moggy at Tuesday, November 01, 2011 4 comments