My frock inspired by the new Gubbermint! (I used this pattern, view 6 and added little sleeves)
Here's the story:
1. It's mostly red, which is the colour they use on election night for Labor
2. It has a small amount of blue in it, because that's the colour they use for the Liberals on election night. The blue is very pale though, as some of the Liberals were that night.
3. Some of the blossoms are green, to acknowledge the work the Greens' preferences did in changing the gubbermint, especially in the seat of Bennelong.
4. It is an Asian inspired design, in the hope the new gubbermint will re-engage with Asia, and because Kev signed the Kyoto treaty. Also, Kev's son-in-law is from Hong Kong originally. Oh, and of course, Kev can speak Chinese!
5. Um, that's it, but I like lists of 5 better than lists of 4.
Posted by kitty at Saturday, December 08, 2007 2 comments

...we interrupt this gubbermint transmission... 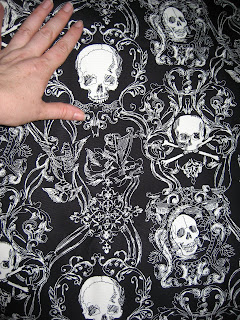 ...with an unrelated fabric update. Thanks to Kitty EE (Evil Enabler) I picked this up from the post office this morning:

It's a sort of mid-weight canvassy fabric. How fab would it look on a wing chair? However I still love the leopard fur my wingish chair is covered in, so that won't happen.

An ottoman? A jacket? Cushions? I have 5 yards... Hand included for scale.

Here's a gratuitous shot of one of my new chandeliers: 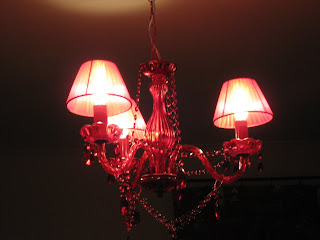 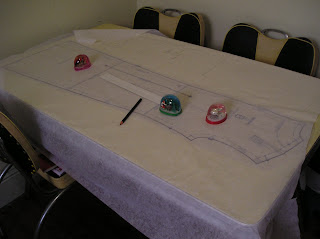 The start of the Livebird Gubbermint frock challenge! Updates over the weekend!
Posted by kitty at Friday, December 07, 2007 1 comments