The frock below was the muslin for this dress, and which I roughly put together to test my pattern draft. I finished it off today, and it's wearable. This version had a mandarin collar, which we ended up not putting on the official version, because it looked a bit tacked on. I don't mind it on this though. 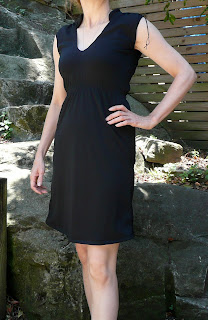 I made a quick knit skirt too. How many black skirts can one woman need? Well, my other pull on knit skirts are too thick to wear in summer, this one is nice and thin. Ignore the bulges from the tucked in shirt, I wouldn't normally tuck a shirt in, but I did for the photo to show the waistband. 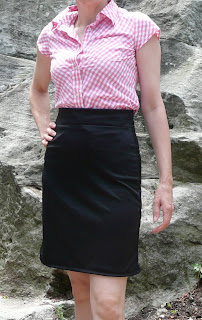 Mended a couple of Mr M's shirts today too, so I'm popular.
Posted by kitty at Wednesday, January 06, 2010 3 comments

Part of my trip preparation ritual is making a new bag. I like to have a bag to carry stuff on the plane and for wandering about the streets with a camera and cardigan and bottle of water and all that kind of thing. 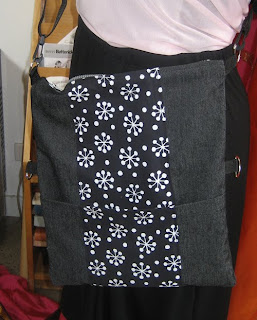 So here's this trip's bag - I haven't road tested it yet, so it remains to be seen if it comes on holiday with me: 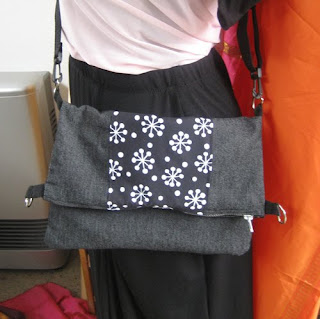 It converts from the big size (good for magazines and carrying bulkier stuff like the aforementioned cardigan) down to a smaller more handbag-size, by clipping the strap on to the middle d-rings rather than the top ones. The rings stick out a bit, but I don't mind that look.
I was inspired by the Timbuk2 Stowaway bag which is delightful but at US$50 for shipping (the bag is on sale at the mo for US$25) it's really not practical.
I also made the dress from Vogue 1020 yesterday, but it is NQR... I think I need to taper the sleeves. Will post when done, but once again it is black so a little hard to see!
Posted by moggy at Sunday, January 03, 2010 2 comments